- September 08, 2022
As of the week ending September 3, 2022, Omicron BA.5 represent an estimated 89% of the SARS-CoV-2 variants currently circulating in the United States, according to the CDC.
In India and Nepal, however, the prevalence of a subvariant of BA.2 (designated BA.2.75) is increasing rapidly and is now becoming dominant in Nepal (R). Moreover, BA.2.75 has been detected in at least 25 other countries, including the United States, Singapore, Canada, the United Kingdom, Japan, and Australia; as such, it has spread across multiple continents (R). The World Health Organization designated BA.2.75 as a “variant of concern lineage under monitoring.”
Using Prescription Drugs 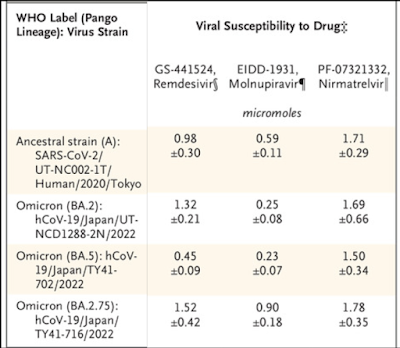 Do take note of the limitation of this study as this is a non-clinical study (not in humans). There is lack of clinical data on the efficacy of these monoclonal antibodies and antiviral drugs for the treatment of patients infected with BA.2.75 subvariant. Therefore, the selection of monoclonal antibodies or anti-virals to treat patients who are infected should be carefully considered based on the potential risks as compared to its potential benefits.
To be effective, these medications must be started soon after symptoms begin (within five days and seven days, respectively). “[People who might be eligible] should call their provider right away,” says Raymund Razonable, an infectious disease specialist at the Mayo Clinic. “These treatments work best when the patients are not feeling so bad.”
Related: Paxlovid vs Bebtelovimab
Other At-Home Treatments
You can find a listing of doctors who can prescribe necessary home isolation medications on Find a Provider post.
There are many COVID-19 treatment protocols out there on the internet. We have reviewed many protocols and believe the FLCCC I-CARE protocol is the easiest and effective to follow.
Always consult your trusted medical professional before you take any medication or supplement.
Related: Treatment for Long COVID Syndrome

Emergency warning signs
Individuals are reminded to seek immediate medical attention (go to a hospital’s emergency department) if they develop emergency warning signs of COVID-19 such as:
Key Takeaway
As soon as you have symptoms, consult your healthcare provider and start treatment as early as possible. If treatment is delayed i.e. after 5 days of symptoms, your chances of severe COVID are higher.
Related:
omicron

Dr. Peter McCullough is an internist, cardiologist, epidemiologist, a full professor of medicine at Texas A&M College of Medicine in Dallas, USA. He also has a master's degree in public health and is known for being one of the top five most-published medical researchers in the United States and is the editor of two medical journals. McCullough et al. Reviews in Cardiovascular Medicine, 2020 McCullough Protocol 2022 In this Sept 14, 2021 interview with Peter Breggin MD, author of Talking Back to Prozac, Dr. Peter McCullough discusses the routine use of diluted (1%) Povidone Iodine mouth wash i n the dental office as an excellent preventive measure for COVID-19.  10% Povidone Iodine is available OTC (Over the Counter) without a prescription at any drug store for a few dollars. Here is the link:   Povidone 10% Iodine on Amazon Note: This 10% Povidone Iodine must be diluted by one tenth, to 1% strength before use as a mouth wash, otherwise it is too strong and irritating. Dilute b
Read more

Well-respected North Texas cardiologist, Dr. Peter McCullough has impeccable academic credentials. He's an internist, cardiologist, epidemiologist, a full professor of medicine at Texas A&M College of Medicine in Dallas. He also has a master's degree in public health and is known for being one of the top five most-published medical researchers in the United States and is the editor of two medical journals. McCullough et al. Reviews in Cardiovascular Medicine, 2020 McCullough Protocol 2022 Dr. Peter McCullough, has recovered well after being diagnosed with coronavirus in October 2020.  The 57-year-old phy
Read more

It is critical to recognize that infection with SARS-CoV-2, the virus that causes COVID-19, progresses through a number of stages and phases. Treatment is therefore highly stage-specific. COVID-19 is a clinical diagnosis; a confirmed antigen or PCR test is not required. Treatment should be initiated immediately after the onset of flu-like symptoms. The multiple therapies and drugs in this protocol have different mechanisms of action and work synergistically during various phases of the disease. The I-Care protocol has been updated several times and below is their latest version ( version 3: September 6, 2022 ). FIRST LINE THERAPIES (In order of priority; not all required) Ivermectin: 0.4 to 0.6 mg/kg – one dose daily for at least 5 days or until symptoms resolve. If symptoms persist longer than 5 days, consult a healthcare provider. See Table 1 for help with calculating correct dose. Due to a possible interaction between quercetin and ivermectin, thes
Read more 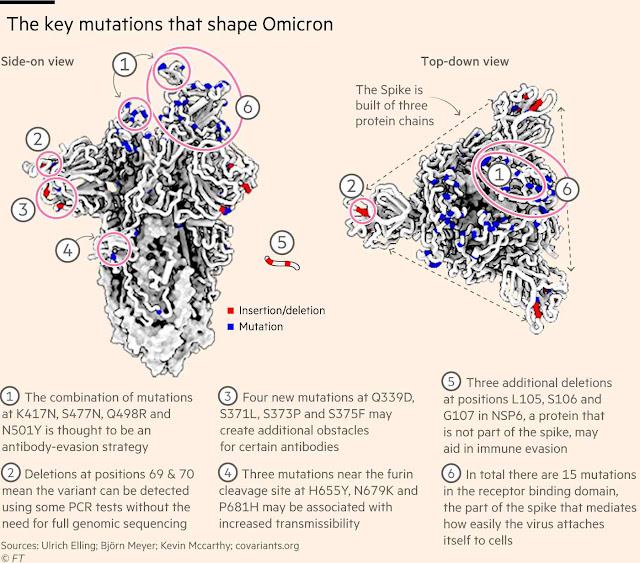 As of the week ending September 17, 2022, BA.5 represent an estimated 84.8% of the SARS-CoV-2 variants currently circulating in the United States,  according  to the CDC. The BA.4.6 Omicron subvariant is the second most prevalent with 10.3% of cases originating from the pathogen. Data suggest that these lineages could be more transmissible than previous Omicron sublineages. However, there is no evidence currently available to suggest that BA.4 and BA.5 cause more severe disease than other variants or Omicron lineages. US CDC is continuing to assess the impact that BA.4 and BA.5 have on public health. What are the signs for getting infected with omicron? There are two specific symptoms that could be signs that a positive COVID-19 test is coming, according to The Independent : Fatigue. Spells of dizziness or fainting. “Fatigue can translate to bodily pain by causing sore or weak muscles, headaches and even blurry vision and loss of appetite,” the report stated. Per Reuters , Dr. Angeliq
Read more

If you’re still coping with symptoms three months or more after being infected with COVID-19, you’re considered a COVID long-hauler. Post-COVID recovery clinics are being launched nationwide to address this still-growing need. As we learn more about post-COVID syndrome, however, the definition has been refined to be more accurate and useful: Subacute or ongoing COVID-19 (post-acute COVID-19 syndrome): symptoms continuing beyond four weeks from acute infection, up to 12 weeks. Post-acute sequelae of COVID-19 (PASC): symptoms persisting beyond the four weeks after acute infection. Post-COVID-19 syndrome (long COVID, long-hauler’s syndrome): chronic ongoing COVID-19 symptoms beyond 12 weeks from acute infection. With 200-plus symptoms linked to long COVID, treatment starts by pinpointing specific medical conditions and referring patients to the right clinicians. These might be lung specialists, heart specialists or brain rehabilitation experts. Patients need a carefully designed but flex
Read more