Did Ivermectin Work in India? How Did They Do It?

- October 07, 2021
Dr. Pierre Kory, an American pulmonary and critical care specialist and founding member of FLCCC, is “thrilled as the pandemic for much of India is over.” Cases are rare, deaths near zero – in Indian states which use ivermectin in early treatment protocols.

In Uttar Pradesh, India, 33 districts have been declared “Covid-free.” With a combined population of 241 million there are only 199 active cases and the positive test rate is 0.01% – statistically zero. It is a poor state and worse, the most-populous in the nation and has extremely high-density cities — the most-fertile environment imaginable for a pandemic virus — yet they defeated COVID with a cheap, widely-available drug.

Last month, The Desert Review wrote: “The New York Times reported India’s colossal drop in Covid cases was unexplainable, while the BBC declared that Kerala’s rise was also a mystery. While new cases of Covid in Uttar Pradesh are rare as million-dollar lottery tickets, in Kerala, a tiny state located in southern India, new daily cases are the same as the United States, nearly one case per thousand. Yet, as we have seen in this series, there has been a curious media blackout on India’s overall success against Covid … So, what could Kerala be doing wrong? Hint: Over-reliance on vaccines and under-reliance on ivermectin.”

Last year, India developed a “miraculously” effective and safe Covid treatment kit – containing zinc, doxycycline and ivermectin – costing merely $2.65 (£1.93) per person. As early as March 2020, India recommended hydroxychloroquine (“HCQ”) in its national guidelines affirming it “should be used as early in the disease course as possible.” But following the June 2020 discovery of ivermectin’s efficacy in treating the virus, Uttar Pradesh announced in August 2020 that it was replacing their HCQ protocol with ivermectin for the prevention and treatment of Covid.

What if there was a cheap drug, so old its patent had expired, so safe that it’s on the WHO’s lists of Essential and Children’s Medicines, and used in mass drug administration rollouts?

The international “vaccine” rollout under Emergency Use Authorization (EUA) would legally have to be halted.

An example of this is an interview published by Rolling Stone Magazine with an Oklahoma osteopathic physician, Dr. Jason McElyea who stated: “The ERs are so backed up [with ivermectin overdoses] that gunshot victims were having a hard time getting to facilities where they can get definitive care and be treated.”  Multiple networks repeated the story, and it went viral.  But the report turned out to be false.

Why would they do this? Because drug companies are getting ready to launch expensive new anti-viral pills that can provide early outpatient treatment for Covid and perhaps even be used preventatively.  Yet, ivermectin remains effective, cheap, and safe and thus poses a huge threat to their profits.

Ivermectin is safe and since 1987 it has been used in over 3.7 billion doses in humans to treat a variety of ailments.  Ivermectin is an antiparasitic drug that may be even more useful against Covid than HCQ.  However, like HCQ, use of ivermectin has been globally suppressed, discouraged and even warned against.

“At least two Indian states have said they plan to dose their populations with the anti-parasitic drug Ivermectin to protect against severe COVID-19 infections as their hospitals are overrun with patients in critical condition. The move by the coastal state of Goa and northern state of Uttarakhand, come despite the World Health Organization and others warning against such measures.” – Reuters, 13 May 2021

Other Indian states also decided to go “all-in” on ivermectin, and they did exceedingly well. The Desert Review reported that according to data from Johns Hopkins University Centre for Systems Science and Engineering  on 10 September 2021:

In contrast, the data shows more than half of all of India’s 10 September Covid deaths (308) occurred in Kerala (177) which has a population of 34 million people. Despite the Chief Minister proudly reporting that 93 percent of Kerala’s residents over 45 have one “vaccination” while 50 percent are fully “vaccinated.”

And the data in peer-reviewed analyses, published independently, reflect massive and reproducible reductions in infections and deaths in COVID using ivermectin:

Reading though our previous articles regarding India gives an indication of the struggle the people have had ensuring ivermectin becomes and / or remains widely-available:

Ivermectin reports from around the world, a twitter thread by Dr. Pierre Kory: 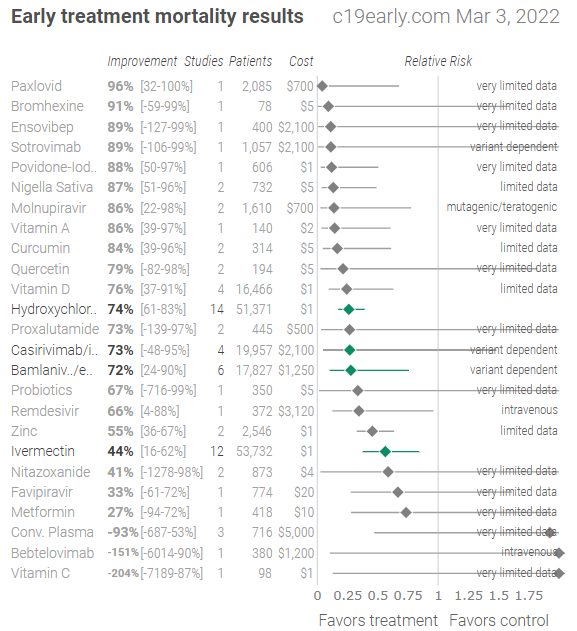