Evidence for Ivermectin in COVID-19 (September 2021)

There’s no evidence that IVM works? There are no randomised controlled trials of IVM? The withdrawn study nullifies the conclusions of the meta-analyses of IVM? Most of the studies on ivermectin are small and are of low quality? We shall wait for bigger and better quality evidence before we can make formal recommendations?
The above are answers that you may have read from various media channels.
While we carefully lay out the evidence in this article, we leave it up to you, the reader, to decide whether ivermectin is effective or not.
That said, always consult your trusted medical professional before you take any medication or supplement. Do not self-medicate.
This article, we will dive deeper to provide the scientific background, related references, updated references and rationale of ivermectin in COVID-19.

Summary of the Evidence for Ivermectin in COVID-19

Ivermectin is an anti-parasite medicine whose discovery won the Nobel Prize in 2015 for its impacts in ridding large parts of the globe of parasitic diseases via the distribution of over 3.7 billion doses within public health campaigns since 1987.
Since 2012, numerous in-vitro and in-vivo studies began to report highly potent anti-viral effects of ivermectin against a diverse array of viruses including SARS-CoV-2. Further, increasing antiinflammatory and immuno-modulating effects are being identified.
FLCCC comprehensive narrative review of the “totality of the evidence” supporting ivermectin was published in The American Journal of Therapeutics in April, 2021 where they reviewed data on efficacy from a diverse array of scientific sources beyond just the randomized controlled trial evidence as illustrated in the diagram below. 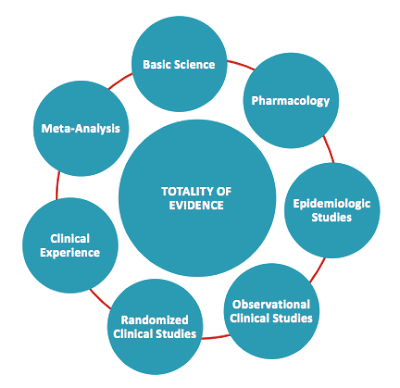 Currently, as of September 19, 2021, the totality of the evidence is as follows:
• IN-VITRO (BASIC SCIENCE): ivermectin has been shown to inhibit the replication of manyviruses, including West-Nile, Zika, Dengue, Influenza, and most recently SARS-CoV-2:
• IN-VIVO: ivermectin diminishes viral load and protects against organ damage in animal models of SARS-CoV-2 infection and has multiple, potent anti-inflammatory and immunemodulating properties:
• IN-SILICO: numerous computer modeling studies have found ivermectin to have one of the highest binding affinities to the SARS-CoV-2 spike protein.
• PHARMACOLOGIC: unparalleled safety profile over decades, prior WHO guidelines report side effects that are “primarily minor and transient” and experts have found severe adverse events to be “unequivocally and exceedingly rare.” Further, the IC-50 against SARS-CoV2 in lung and adipose tissue easily achieved with standard dosing (Caly/Wagstaff personal communication)
• CLINICAL OBSERVATIONS/EXPERIENCE: numerous cases series, most notably one published from the Dominican Republic in June 2020 where over 3,000 consecutive patients presented to the ER, were treated with ivermectin, and only 16 were hospitalized and only 1 died. Also, innumerable doctors from multiple countries around the world report observing consistent clinical responses in treated patients with few treatment failures.
• OBSERVATIONAL CONTROLLED TRIALS (OCT): As of August 8, 2021, the results from 31 OCT’s including over 6,800 patients find that treatment with ivermectin reduces time to recovery,rates of hospitalization, and mortality, the latter finding best reported in the sophisticated propensity-matched study of Rajter et al. published in the major medical journal Chest.
• META-ANALYSES OF RANDOMIZED CONTROLLED TRIALS (RCT): 27 RCT’s including over 3,400 patients have been completed. Meta-analyses find that ivermectin reduces time to viral clearance, hastens recovery, and reduces mortality.
• OBSERVATIONAL AND RANDOMIZED TRIALS IN THE PREVENTION OF COVID-19: A series of 13 RCT’s and OCT’s consistently find that single or repeated ivermectin use strongly reduces the risk of contracting COVID-19, with an average level of protection of 86% with higher levels of protection found amongst the trials with more frequent dosing:
• EPIDEMIOLOGIC: ivermectin distribution campaigns in Peru led to far lower COVID-19 case fatality rates in those regions with widespread use. Further, large “test and treat” programs conducted by increasing numbers of Health Ministries report up to 75% reductions in the need for hospitalization (Mexico City) and massive reductions in mortality (Misiones, Argentina and La Pampas, Argentina). Finally and most importantly, the Indian state of Uttar Pradesh (241 million population) has effectively eradicated COVID via systematic and widespread use of ivermectin in both prevention and early treatment.

Test and Treat Programs with Ivermectin

The reports most relevant to public health officials are from the national and regional health ministries that employed either distribution or “test and treat” programs with ivermectin:
• Mexico City – The IMSSS Health Agency compared over 50,000 patients treated early with ivermectin to over 70,000 not treated and found up to a 75% reduction in need for hospitalization.
• Peru – A nationwide mass-distribution program called “Mega-Operación Tayta” (MOT), initiated at various times across 25 states of Peru in May 2020, led to a 74% drop in regional excess deaths within a month, with each drop beginning 11 days after each MOT region’s varied start times.
• La Pampas, Argentina – Health Ministry compared over 2,000 patients they treated early with ivermectin to over 12,000 without treatment and found a 40% reduction in hospitalization and 35% less ICU or death in older patients.
• La Misiones, Argentina – Health Ministry just analyzed the first 800 of 4,000 ivermectin treated patients and compared to the rest of the population over the same time period, they found a 75% reduction in need for hospital and an 88% reduction in death.
• Uttar Pradesh, India – Used a strategy of close surveillance combined with both ivermectin treatment of all positive cases and preventive treatment of all family contacts. On September 10, 2021, only 11 cases with no deaths were recorded in a population of 241 million. As of August 31, of the previous 187,638 tests performed, only 21 were positive, an essentially zero positive rate or .01%.

Finally, in both “long-haul” COVID and post-vaccine syndromes, ivermectin is proving to be highly effective at eliminating symptoms based on the rapidly accumulating clinical experiences of the FLCCC and a number of allied experts that co-developed the I-RECOVER protocol, centered around the use of ivermectin in these syndromes.

The totality of evidence for ivermectin is large enough that removal of any single data set, trial or study has minimal impacts. The integrity of one study in Egypt (Elgazzar et al) out of the then 28 RCT results available, was recently called into question. While we share the concerns about this study, the removal of its data from the most comprehensive meta-analyses did not change the conclusion that ivermectin is highly effective in both prevention and treatment.

Based on the totality of the existing evidence above, the FLCCC strongly recommends ivermectin be used in both the prevention and treatment of all phases of COVID-19 in both vaccinated and unvaccinated populations.
Adapted from: https://covid19criticalcare.com/wp-content/uploads/2021/08/SUMMARY-OF-THE-EVIDENCE-BASE-FINAL.pdf